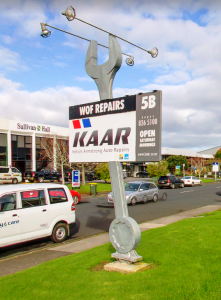 This issue, I wish to answer the question from Kelvin’s perspective – What is in it for me?

If we are successful – I can get back working on my business and personal balance and enjoy the benefits!

It’s no secret! But just in case. My business KAAR Avondale is located in the Whau District, across the creek in Rosebank Road, which has its own Business Improvement District run by Rosebank Business Association.

I opened this business in 1994, I worked in it, I worked hard, I worked many hours. The business was busy and doing quite nicely it was growing and I was keeping the taxman/woman happy! I had no formal business training and to be honest struggled getting advice and confirmation I was heading down the path of true success, though I did have Business Coaches, yes a few!

I joined RBA in 2004 and attended many networking events meeting quite a few other successful business owners and managers which was good for me personally.

Then RBA in 2005 was successful in its BID, stepping up the association in its activities, and widening the connections. One of those connections was Waitakere Enterprise, based in Henderson, which managed the Westpac Business Awards and the Event aspect of the West Auckland Business Club. In 2010 I was encouraged to visit the awards process, with their support and resources from their BID!

I attended all the Events and built many relationships, but most of all if it was not for the support of the Business Association and Waitakere Enterprise (Now ATEED and formally events coordinator for WABC), who knows but now I may still have been swinging spanners!

Think what could be done in our Business Improvement District, now the CPHBA owns the WABC and the sheer size of our district, the diverse mix of business, we can be as successful as we want to be, in my case it was confidence. In yours it could be just community or access, roading, employment, security the list goes on.

We all have challenges, with no or little resources or capability to challenge them – together we can achieve more!

What did the BID do for me?

The Business awards may not be your cup of tea!

There are many other opportunities such as Events – Networking. Being able to have a casual chat with a Bank manager, Lawyer, Accountant or a marketing consultant at the monthly networking meeting strengthens relationships and trust. On the other perspective I get to see some of my customers and they get to know me better. Hey even if the other networkers aren’t one of my suppliers, I can get a second opinion on a task of issue I may have at the time. If I’m lucky and I suit their requirements I may get to service and maintain their vehicles in my business! Which is a bonus. I find it is much more comfortable to do business with someone you know.

Event – Hosting In 2008 I hosted the RBA Membership/BID, it was a great night we had the opportunity to introduce business owners to our business and my people, we gained credibility and reaffirmed our professionalism.

Security by knowing my community, I’ve had phone calls from fellow members of suspicious activity around my business afterhours. It’s a different perspective, when you are driving past a business that you know one of the staff you may have meet through the networking or know they are part of a group you belong to a sense of community, you see something suspicious you act on it, because you know they would do the same. I have had many such cases, from rubbish dumping to suspicious people tampering with vehicles in nearby carparks.

Graffiti was a big issue in Rosebank road, for many years, by having a Membership/BID association or a centralised “who you going to call” opportunity, it reduced the area looking like third world. Though I was fortunate to only have a couple of minor issues that I repaired myself, I reported many infractions.

Traffic, being part of the Membership/BID, I did not have to research roading or public transport issues, I was kept abreast of activities through the communications, also read of first-hand issues that other owners had and knew the local BID/association would be assisting in the advocacy. Let’s face it a singular voice would not achieve much.

We are now well connected at CPHBA, a ‘BID’ would strengthen and future proof our community