Leah Brown (from running to phone to running the firm) 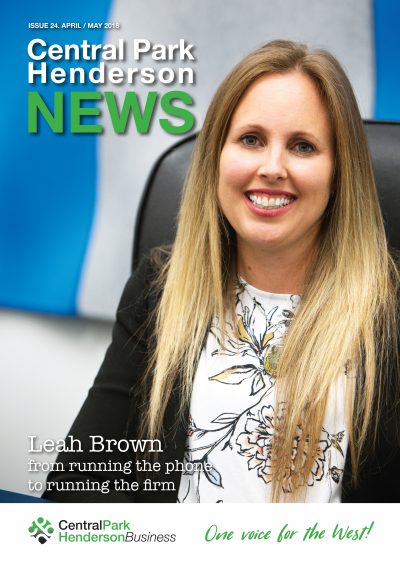 Flashback to August, 2000: fresh-faced and straight out of high school, Leah Jones (18) gets the receptionist’s job at Soil & Rock Consultants, in New Lynn.

Fast forward to April, 2018: Leah Brown as she now is, and 36, sits in Soil & Rock’s Rangitoto Room – its boardroom – as the company’s national operations manager, and a shareholder to boot, to discuss the firm’s story with Central Park Henderson News.

Remark that this is some sort of receptionist-to-riches saga and she smiles. “It’s nice to know that my personal story is interesting but I’ve never really thought about it like that. I just keep going.”

So does Soil & Rock. From its small beginnings in 1987 the company has moved from New Lynn, to Henderson, and now to Lincoln Road. It also has branches in Christchurch, Wellington and Whangarei.

It employs about 55 people and the average age of them is Leah’s age – 36. But she is quick to point out that those with silver hair are not neglected.

“We have a handful of people whose combined technical experience in the job totals 200 years. And then there’s the younger graduates – it’s a fine mix.”

Leah is a quintessential Westie. She grew up in Glen Eden, moved to Glendene and now lives in Te Atatu South with her school days sweetheart from Kelston High, Davey Brown.

Davey is the stay-at-home dad, looking after sons Dallas (5) and Marshall (2) and taking Dallas to football and athletics. “We are not allowed to refer to soccer,” says Leah.

At home, her husband is known as “the professional comper”. “In the past five years he has won us four overseas trips.” One to Los Angeles, another to Paris, during the Bastille Day Celebrations, another to the Gold Coast, and lastly to Melbourne for the Formula 1 Grand Prix.

Living in Te Atatu South is great for Leah’s work. “It takes me three minutes to drive to get here each morning – I go home for lunch. There is one set of lights and they’re usually green. If it’s red and I ask myself what’s going on?”

Which is fine for Leah, but with Auckland’s traffic problems the company is seriously looking at more flexible working arrangements. “Many of our team working in the field need to start at 7am so there may be a case for a 7am-3pm work day.”

When she and Davey left school she didn’t know what she wanted to do. “I was trolling around for jobs, and everyone said ‘You need experience’ which is hard to get when you haven’t got a job.”

Finally, Davey got work washing dishes with Planet Hollywood, and Leah got the “come in on Monday” call from Soil & Rock.

In 2002 she trained in word processing and accounts, so she ended up typing up reports on the accounts side of the business. She began studying for a Bachelor of Business and Davey joined the company doing field work.

By 2010 and married, Leah had been at Soil & Rock 10 years and was pushing the 27 mark. Both she and Davey had taken courses with TESOL – Teaching English to Speakers of Other Languages.

Vietnam seemed alluring. “We said let’s go there, immerse ourselves in the culture, start there and backpack all over the place from a base in Hanoi.

“But first I had to get a job and a few days before we left Auckland, I saw an ad in The New Hanoian,  advertising a job at the New Zealand Embassy.”

On the way to Vietnam, they stopped over in Malaysia. “I bought a corporate-looking suit in the anticipation of getting an interview.”

The suit must have been pretty snazzy because Leah became executive assistant to the New Zealand Ambassador, Heather Riddell, a lifetime diplomat. As such it was Leah’s task to organise banquets when VIPS – think people like John Key and Foreign Minister Murray McCully – visited.

She made travel arrangements for diplomats going here there and everywhere and did consulate work for Kiwis who were having troubles with illness, or visas, or whatever.

“Getting that change from the private sector to the public sector was an amazing experience. And meeting and eating with fellow workers from other embassies like the US, Canada, Switzerland – you name it – it was just like being in the United Nations.”

“When he was nine months old, Soil & Rock rang me. They said, ‘We’ve doubled in size, opened a new office in Christchurch where there’s so much work on the post-quake re-build, so how about coming back’?”

Four weeks later she was back at Rock & Soil and very soon national operations manager. The company then had 30-35 staff but she took charge of a re-structuring and to the current 55 or more.

As its name suggests, the company is one of the leading experts in rock, soil and water. One of its brochures says Soil & Rock engineers have been drilling and sampling “and generally getting our hands dirty since 1987”.

They carry out geotechnical investigation & design, environmental servicing, contaminated land management, advise on storm & waste water design, hydrology and hydrogeology, while also advising on slope stability. “We are committed to providing a quality service, on time and on budget, our thinking is solution-based”.

Some of Soil & Rock’s projects include the Auckland Blues high performance training centre at Alexandra Park, State Highway work for the NZTA, projects for Vector NZ, a grandstand for Christchurch Boys’ High School and the development of a vast site for Auckland Airport.

All of which, of course, keeps Leah PDB – pretty darned busy.

“The job involves logic, commonsense and loyalty,” she says. “You have to take egos right out of it. I have confidence, I go with my gut instincts – and I have ideas.”

The fact that now she’s a shareholder in the company helps. “It was a really important step for me. It was like ‘wow, finally I’m really a business owner’ and that’s good, because I care about this company so much.”

That care is almost certainly reciprocated.